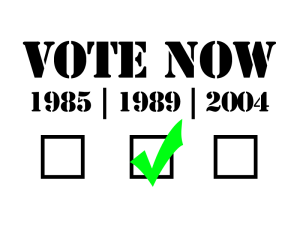 Heroically overcoming technical difficulties (or rather, Gerard’s rubbish internet), we return to bring to you THE SECOND BEST YEAR FOR FILM EVER. But if that’s the case then why do Gerard, Phil and Martin discuss three different years? That’s because this week it’s down to YOU. Listen to the podcast and then you vote to decide which will become THE SECOND BEST YEAR FOR FILM EVER. Simply send an email to lethalwatching@abadeducation.com with which of the three years presented you think should win this immense honour! Vote now! NOW! Well, after you listen to the podcast. Then vote. Vote!