So me and Ryan sat down last week over a delightful KFC bucket and a game of Lord of The Rings Risk to hash out the rules for the game. Which we did. Or, rather, which I did then read it out to Ryan as he was counting out his soldiers whilst setting up the game board. So he may agree with them or he may not but I’m posting them anyway.

1) No surprises, as in no buying a game and then launching in with a challenge. It must be a game that both players are comfortable with before a challenge can be made

2) A challenge may be called at any time or place.

3) Both members must agree to the challenge before the game starts, i.e, you can’t be playing a game with an unassailable lead then decide to turn it into a challenge.

5) If a player is found to be cheating then they are immediately disqualified and the opposing player is given the victory. If a player cheats and it is only discovered after the game has finished, tough.

6) A challenge can be refused it is deemed to be inappropriate; for example, calling at 0200 hours and challenging a game of ten pin bowling or if one person is out of the house and is challenged to a video game contest. The challenge must, however, be organised for the earliest next available time slot.

7) Once a challenge is started, there is no backing out, excuses or anything else.

8) There is no set order as to who can give the challenges (not one person then the other etc) but the person who does give the challenge will have to write up the post for the site and/or sort out the photo gallery and/or edit the video to illustrate the battle.

10) The winner of each challenge will be the person who won the game in question as dictated by the rules of said game. There will be no argument with this.

11) Once a game is played in a challenge it cannot be used again. It is okay to play the game in friendly competition but it is no longer eligible for challenges.

And the game of Risk? It was out of competition but this picture should tell you all you need to know: 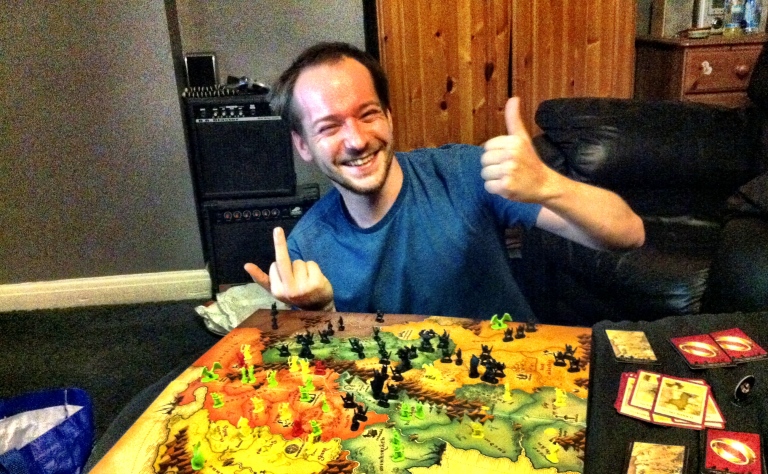