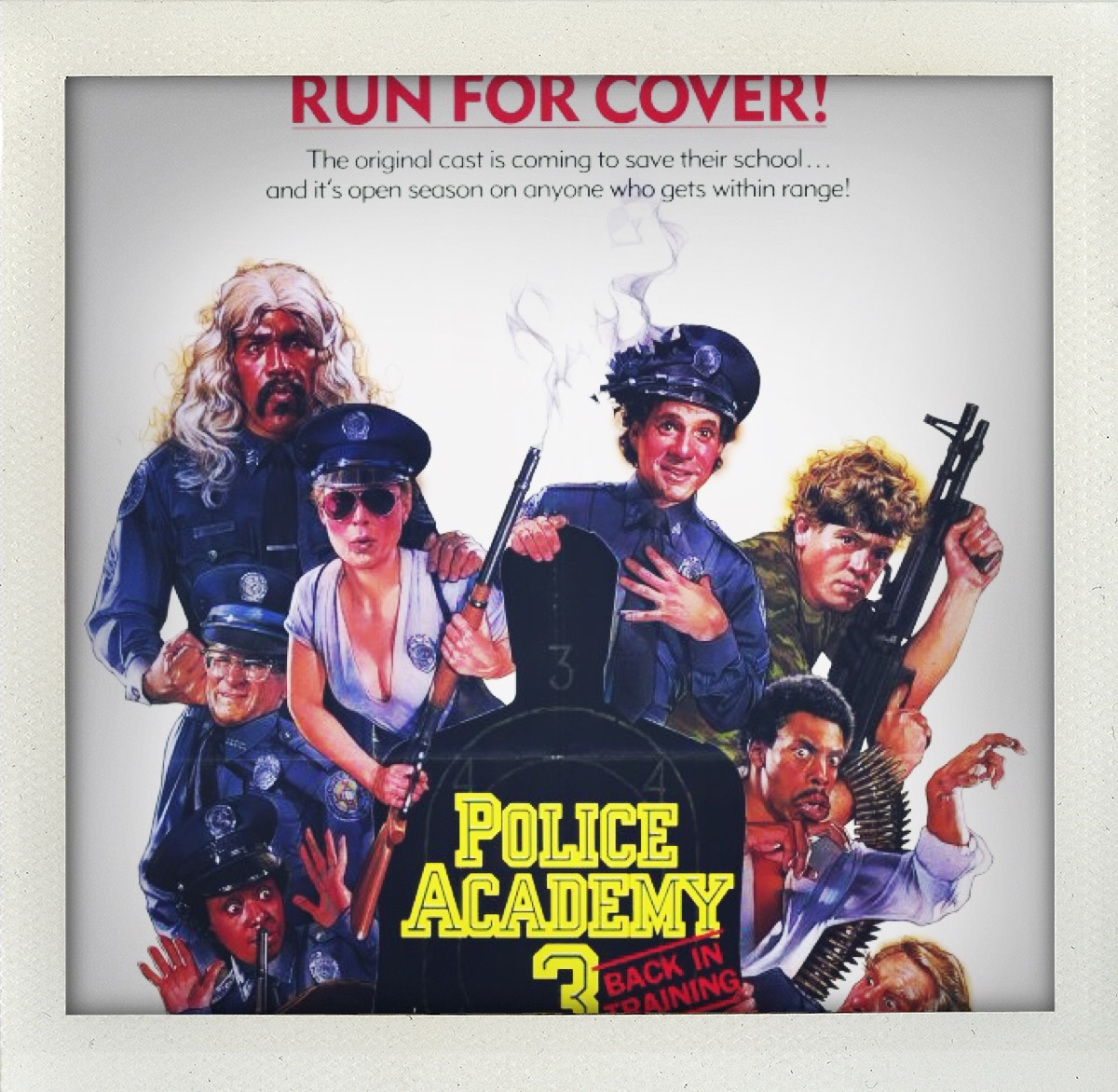 If there was one thing your could set your watch to in the 1980s it was the Police Academy series. Once the first film came out in 1984 it was quickly followed with Policy Academy 2: Their First Mission (1985) and then this year’s film, Policy Academy 3: Back in Training (1986).

This series has often been compared to the UK’s Carry On series, mainly due to the broad humour and returning cast. Where they differ is that whilst Carry On would take that cast and drop them in a new situation in each film (like a campsite or the Roman Empire or a hospital) as new characters Police Academy continues the story of the first film.

And what a story it is!

So after their adventure taking down street gangs, why not go back to the Police Academy to train new people?

In fact, the plot is based around the Governor deciding that they can’t support two Police Academies so there will be a review process to see which one stays. One of which is Lassard’s, the other one (the one we’ve never heard of before) is headed up by Commandant Mauser. Remember, he was the mean guy in the second film who was a Lieutenant who was promoted to Captain and then got demoted back to Lieutenant and is now a Commandant in charge of training police.

Look, the film series has never tried to make sense so there’s no point trying now after three films is there? The point is to get the crew back together to run through all the same jokes. Mahoney is the cool guy sticking it to the man. Jones makes funny noises. Tackleberry has lots of guns. Callahan is aggressively sexual. Hooks speaks quietly then shouts and punches someone.

Is there a point in going through the plot? No. It’s just a setup for these jokes, repetitions of what we’ve seen before. It’s like these characters are stuck in some kind of time loop destined to carry out the same actions over and over again. It’s lucky the cast are likeable enough to carry it off, though by now it’s clear things need shaking up.

They half heartedly do this by introducing new trainees, the most interesting one being Bobcat Goldthwaite’s Zed. After running the street gang of the second film he’s now a reformed character, to a point, and he stands out the most amongst the other stereotypes that are brought in.

Look. There is no real defence to this film, to the lazy jokes and crass language used against various groups of people. You can see the thread of this comedy through to the Farrelly Brothers films and so on, low brow toilet humour. Sure, you need that kind of humour every now and then, a good dick joke can often fill a spot that a high brow farce can’t. The problem is that the film is coasting on the good will and decent characters generated by the first film.

Returns were diminishing at this point: the first film made over $140m, the second over $60m, this one over $40m. The film also dropped to a PG rating as opposed to the R rating of the first and PG-13 of the second. The home video market propped up the film justifying the inevitable sequel.

The Police Academy series is like that uncle we all have; you remember him being a hoot when you were younger but with each passing year he just get sadder and sadder. The worse thing is that there are lower depths to plumb for the series.