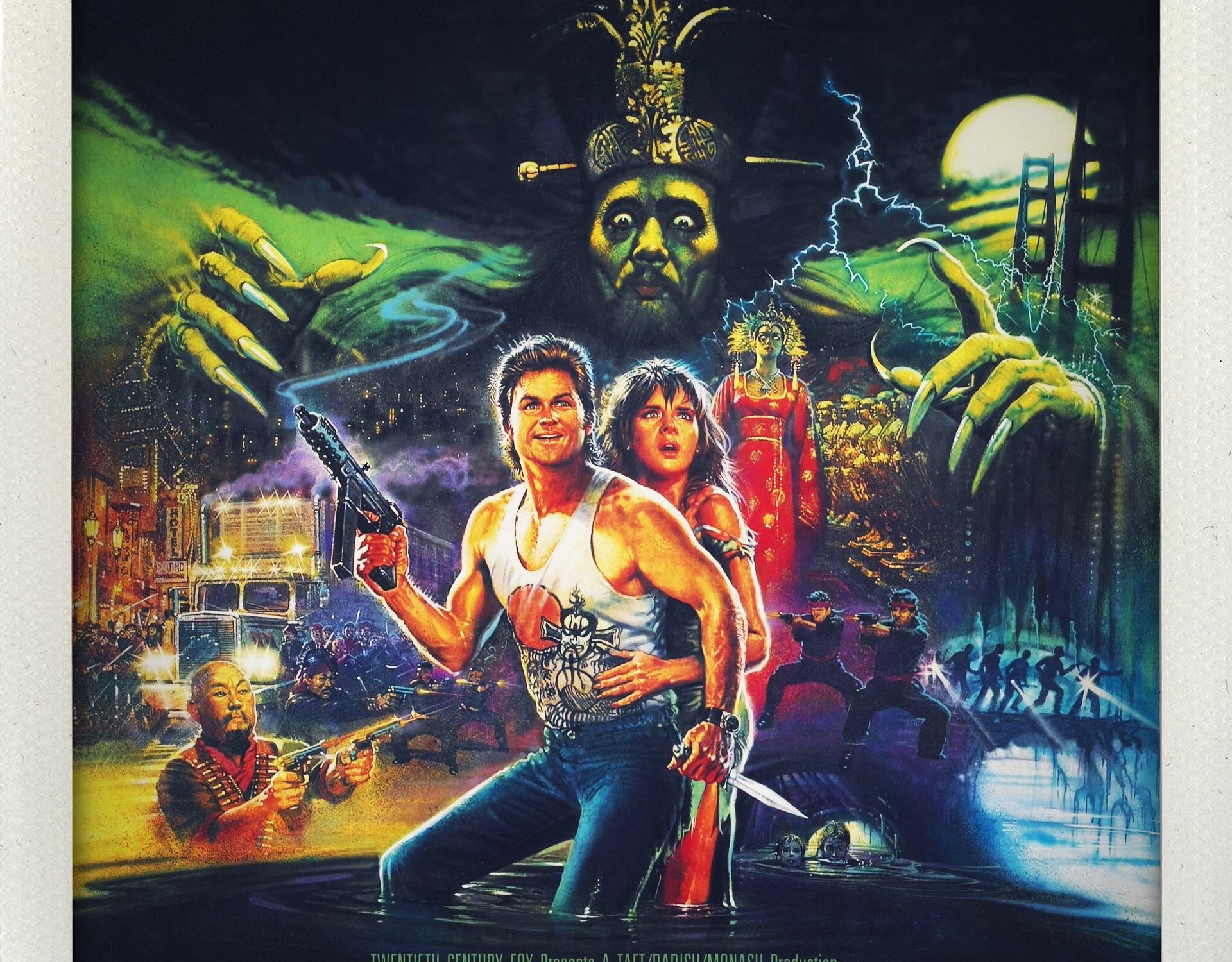 My favourite film maker is, by far, John Carpenter. Not 100% sure why really. Don’t think they were the first films I saw or anything like that, I think it was because of Big Trouble In Little China (1986).

Given when it came out, I didn’t know anything about the film. The VHS release came a year or so later, as was the custom at the time. I didn’t see it then, but I remember my Dad talking about it. As I sat in the back of the car he described the kung fu, the monsters and a bad guy with light coming out of his mouth. My mum told him off for scaring me. I knew I needed to see this film.

John Carpenter’s career is well known to have ups and downs, from Halloween (1978)becoming the most successful independent film until the release of The Blair Witch Project (1999) to something like most of his work post 1995.

Big Trouble stands as probably his biggest box office failure, the one that sent him back to independent movies and is also one of his best.

Kurt Russell is Jack Burton, a trucker delivering to San Francisco. He meets an old friend who is meeting his soon to be wife at the airport. Before you can say “It’s all in the reflexes” Jack is dragged into a world of kung fu, ancient demons and black Chinese magic.

It’s common knowledge that the studio thought this film was going to be huge and that Jack Burton was going to be the next Indiana Jones level character. And that’s because they misunderstood the film. Carpenter has described Jack as a sidekick who thinks he’s the hero and that’s right: Burton is a bumbling fool whilst everyone around him are getting the job done. Russell invokes the spirit of John Wayne in how he portrays Burton and Carpenter uses it as a satirical tool against the usual action fare.

Of course, the trailers portray Burton as the typical amazing hero, which would perhaps be why the film didn’t connect with an audience. Given its influences it’s no surprise that the marketing department couldn’t get a handle on it.

Carpenter wanted to direct a kung fu film since the 70s when he saw Five Fingers of Death (1972) but the main film to influence him would be Tsui Hark’s seminal Zu Warriors From The Magic Mountain (1983). This was part of the wuxia sub-genre of Hong Kong martial arts films with a heavy dose of Chinese ghost stories and monsters. It was a landmark film with western special effect techniques being used alongside traditional eastern wire work. Big Trouble would use this template in a modern day setting with a largely Asian cast, other than the two main stars Kurt Russell and Kim Cattrall.

Problem is, martial arts films weren’t exactly hot stuff at the box office. Sure, The Karate Kid (1984) had been a big hit but it was more of a teen film that a full on martial arts film. Prior to that you had to go back to the film that started everything, Enter The Dragon (1973), to find a martial arts film that had made a huge cultural impact. If a film like that did get a wide release then it quickly left the theatres, and most would soon find their true home in the burgeoning VHS rental market.

So you have a film that is bringing in all these eastern cinema influences, things that have been bubbling under mainstream culture for the past few years, and repackaging them for a western audience. Looking at it that way, the logic is sound. It’s just about ten years or so too early. How do we know this?

Because The Matrix (1999) did exactly the same thing.

The Wachowski’s took Heroic Bloodshed style action, added in the wire based kung fu and covered it in an art design that was directly influenced by anime and manga. Once it was ran through the Hollywood production machine you had a film that created a cultural impact that resonated for years afterwards.

So why did that succeed when Big Trouble failed? Well, maybe there weren’t enough people out there to support the film, to pick up its influences and enjoy it. Straight out of the gate the film was hit with bad reviews that would have sink it via bad word of mouth.

In the years that followed what was a small niche would become a full blown cult. The anime boom of the late 80s hit, John Woo films began to cross over, more and more people were drawn in. Factor in the Internet, which helped people to realise just how many people out there loved the same things, and it’s a massive snowball effect. Once you get to The Matrix there’s enough people to make the film a big hit out of that gate which would draw in the other moviegoers eager to see the new cool thing.

Big Trouble didn’t have that. It was a film shoved in front on an audience who didn’t know how to read it; was it a comedy? Horror? What’s with these guys with lightning and stuff? Why is the hero an idiot?

That may have been a problem as well. Audiences were used to their action heroes being big and strong and gunning down all the bad guys, not running around trying not to get killed. It wasn’t like they didn’t like a fairly normal looking guy like Russell running around in a vest, as John McClaine would prove in a couple of years time however he was still a straight forward shoot em up action hero character at heart.

Once Big Trouble got to video it would be discovered, like Carpenter’s other hugely mistimed film The Thing (1982), and an audience would grow around it. Praise is now heaped on both films but both are also the films that knocked Carpenter out of the mainstream and back into the smaller budget independent market.

Carpenter often said he was a director born out of time, that he would have flourished in the studio system of the 30s and 40s. Big Trouble in Little China suffers the same fate, a film made decades too early that was a box office bomb.

When I saw it I loved it and still do. Sometimes, films aren’t made for everyone; they’re made for a small boy that saw Enter The Dragon way too young and made his parents repeatedly rent out VHS tapes of Mazinger Z and Ultraman animes. Sometimes, films fit you like a glove and it doesn’t matter what anyone else thinks.

Big Trouble in Little China fits me like a glove.