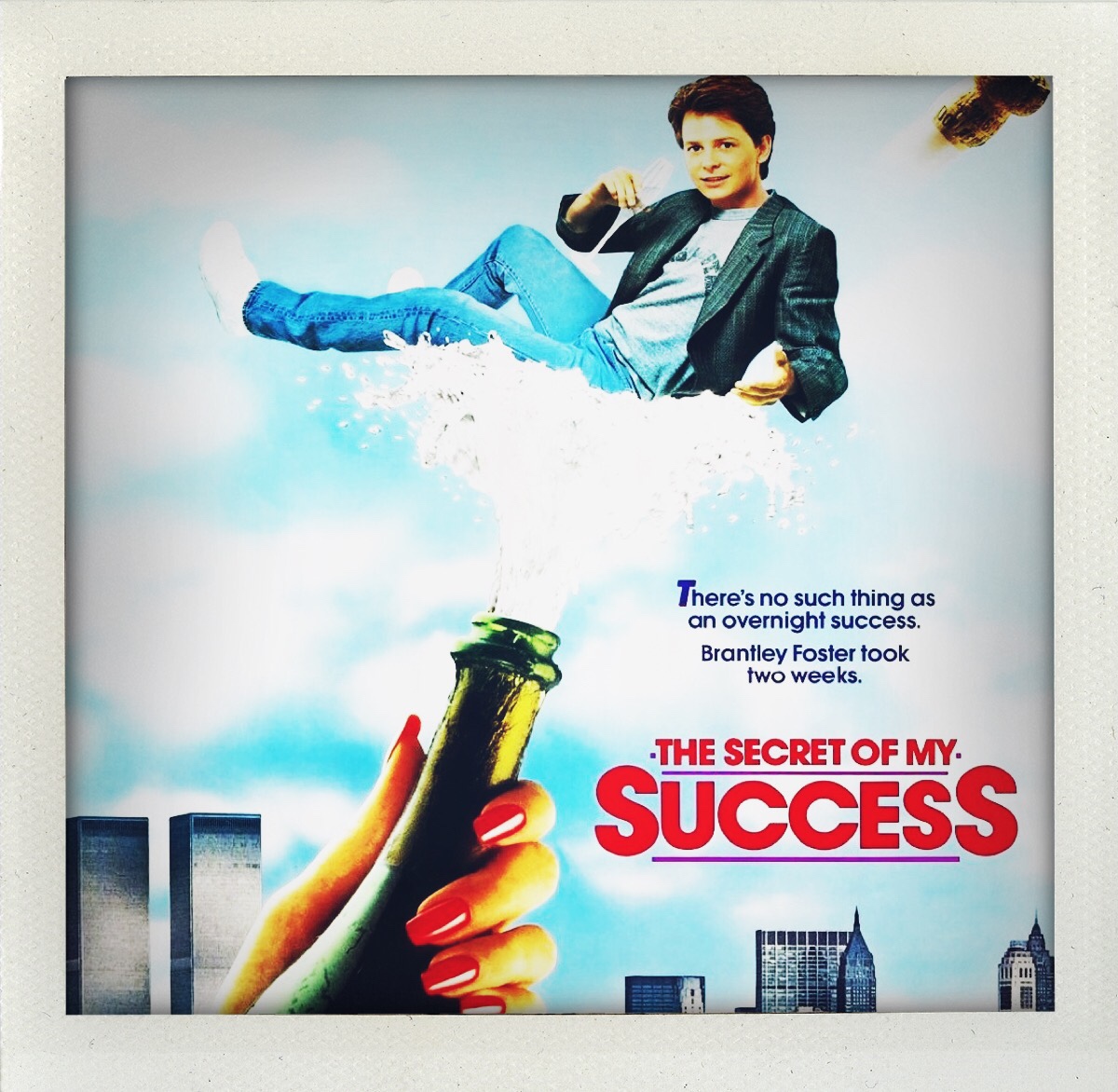 So Michael J Fox, in short order, became a huge movie star off the back of Back To The Future (1985). The problem came, obviously, with following up on that.

We’ve seen Teen Wolf (1985), which you can’t really call a proper follow up considering how close to BTTF it was released.

The Secret of My Success (1987) is certainly a proper follow up, being that he’s not straying far from the McFly mould.

Here he plays Brantley Foster, a farm boy from Kansas with dreams of making it in the Big Apple. He joins a company which is promptly bought out and everyone fired. So he contacts his distant uncle who works for another corporation and gets a job in the mail room. The only way is up right?

This is one I hadn’t seen before, at least the actual film itself. The cover I had seen, burned into my memory as a child seeing it in video libraries. Make no mistake, even at a young age I wanted to be Marty McFly so seeing him there, suspended in the air by a geyser of champagne is one that’s hard to forget.

That’s not something you could apply to the film. It’s a fairly forgettable romantic comedy that borders on being a sex farce. Soon into Brantley’s career he is seduced by a wife of one of the executives, who turns out to be the wife of his uncle making her a non blood relative aunt. So it’s weird but just about okay if you’re in a film comedy.

She spends the rest of the film constantly trying to get in his pants in in appropriate places. Meanwhile, Brantley uses his position in the mail room to create a new identity as an executive that has joined the company. Cue hilarity as he tries to juggle his two jobs whilst falling for one of the female execs.

It’s also interesting to see this pre-Wall Street (1988) view of corporations as still capable of being a family run thing with good intentions if they can fight off the naughty greedy people. This was seen in Mannequin (1987) as well. I mean, I’d hardly be expecting a film like this to deliver a scathing commentary on the capitalist financial systems. It’s just weird to remember a time when this probably wasn’t a million miles away from the truth before the Greed is Good culture washed over everything.

Secret of My Success is hardly a triumph but manages to utilise Fox’s charm and comedy skills as best it can. This is probably due to the director, Herbert Ross, having been in the industry long enough to know to put things together. His career on the screen went back to the sixties as choreographer for Cliff Richard films going up to his most recent film, Footloose (1984) which scored big at the box office. For him, this wasn’t the greatest follow up either despite making the top ten grossing films of the year. More than Lethal Weapon (1987) in fact. Yep. Honest.

Fox’s post BTTF career would involve a fair few attempts to get away from the Marty McFly mould but The Secret to My Success is not one of them. It’s fluff of the middlingest order, one that would have been totally forgotten if not for the star at the centre of the film.