1325 – BBC1 – The definitve action adventure film that, to be honest, still hasn’t really been bettered 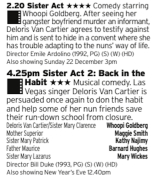 1910 – ITV4 – Guttenberg Day concludes with, what else, but a Police Academy film. Chill out after that with a comedic tour de force from Billy Connolly then finish up with a big daft comedy

2300 – BBC1 – Not quite sure why this is on so late, regardless this a proper hoot of a film especially considering the troubled production it had