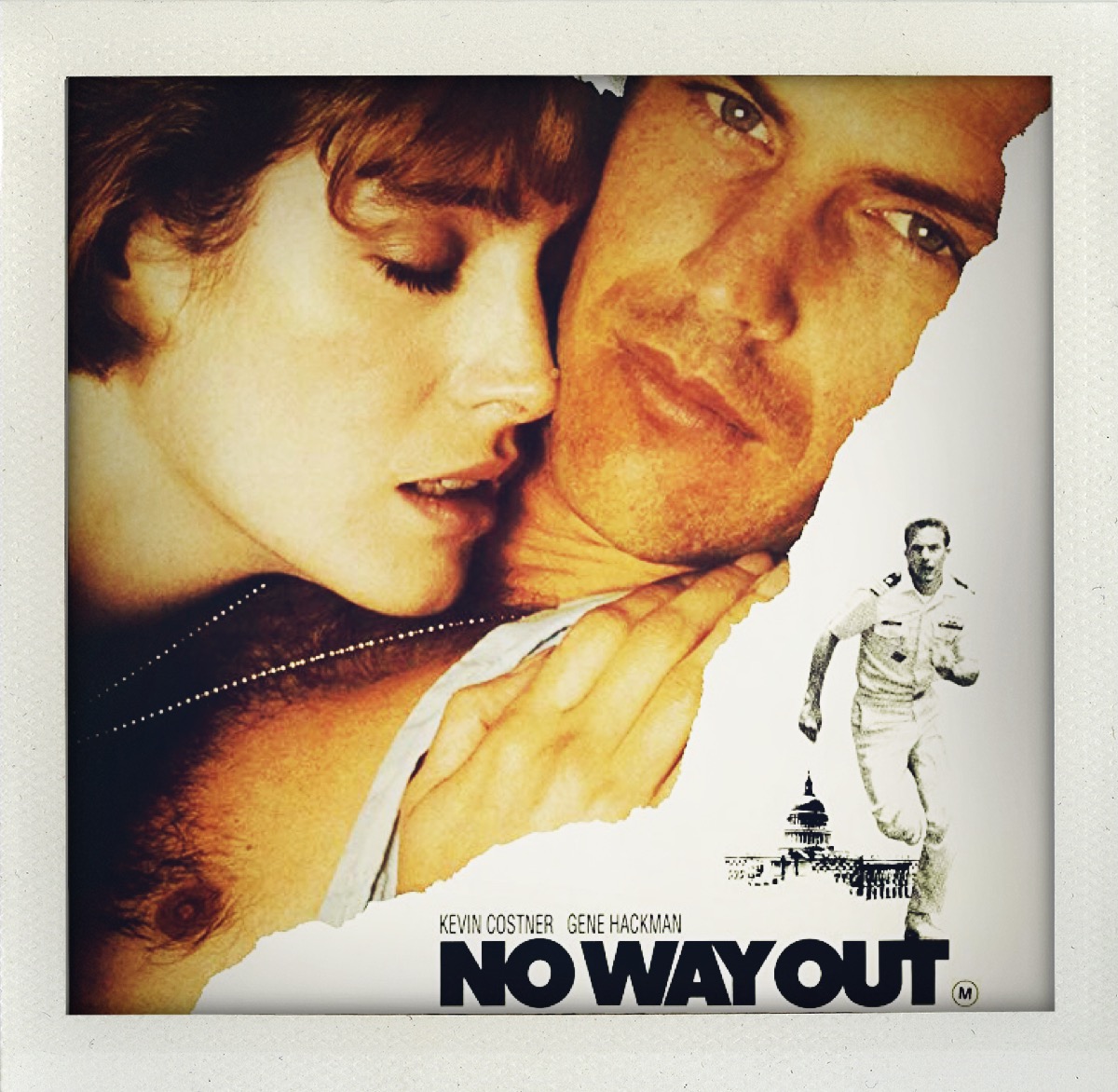 Kevin Costner was starting to get big time by this time, thinks to films like The Untouchables (1986) which centered around his squared jawed all American-ness. But, if it’s one thing that you need to learn in order to make it is that apple pie doesn’t get you all the way, you need a bit of grit in there to keep things interesting.

This brings us to No Way Out (1987), a gritty political cold war thriller with a bit of sex and murder along the way. Perfect.

Costner is looking to get close to the Secretary of Defence, played by Gene Hackman in order to progress his careers in the Navy. He meets him at a party but blows the meeting, but does hook up with Sean Young and starts a relationship with her. She, however, is already seeing someone else who is married. After this, thanks to an act of bravery, Costner is invited to join Hackman’s staff at the Pentagon. Costner meets up with Young, however this other partner shows up and wouldn’t you know it but its only Gene Hackman. Costner dives out the back but not before seeing Hackman murder Young for seeing someone else and Hackman also sees Costner, but not his face. So Hackman knows Young was seeing someone else, whereas Costner knows that Hackman killed her. The obvious way out is for Hackman to team up with Costner’s friend played by Will Hutton to frame the other (as yet) unknown lover as the murderer and as a known Russian mole named Yuri. So, just to make things a bit more complicated, he gets Costner in as part of the investigation. So you’ve got Costner trying to take part in this investigation whilst at the same time proving his innocence without anyone else finding out, all before a photo of him, which is slowly being enhanced, is unveiled which will implicate in the crime.

It’s a twisty one, this one. You’ve got the Cold War tale of spies and their craft all tied up in a bit of infidelity and murder. It mainly works thanks to the strength of the cast. Costner, as noted already representing the American Way, seems to enjoy playing this murkier character. It’s not something he would return to all that often, for a good while his bread and butter was the stoic, slightly flawed but good (and bland) hero. Having Hackman opposite him is a great choice, the young up and comer standing up to the grizzled veteran.

This isn’t to say that, at this period, Hackman counted as glamour casting. His film choices during this decade weren’t exactly stellar, as we can remember from Superman IV (1987). But whilst his star may have been a bit tarnished, that doesn’t stop him from being a really properly good actor. If the good hero was Costner’s bread and butter, then playing the good but willing to be bad character was Hackman’s. It’s not to compare the character he played to someone like Popeye Doyle, far from it. But Hackman could get to that place where you believe that someone will do what they need to do in order to protect themselves.

So this is a good, if daft, thriller with a nice sting in the tail. What truly helps the film is that photo of Costner being slowly unveiled. It gives the film a constant reminder of it’s deadline, something that helps the tension slowly build up over the course of the film.

It was a decent success, another feather in the cap for both Costner and Hackman. Both would continue their rise after this film, Costner arguably peaking with Robin Hood Prince of Thieves (1991) whereas Hackman would become a top-level supporting actor grabbing himself an Oscar along the way. For the director, Ronald Donaldson, this would be his breakthrough hit in the US. He would go on to work with another up and comer the next year in the shape of Tom Cruise before settling into a decent film career. Depending on your point of view the high point would either be Species (1995) or the film that reunited him with Costner Thirteen Days (2000).

Thats probably a good summation for this film; it’s a decent film to have on your resume. It’s a good twisty thriller with a good ending that made a bit of money. Considering the depths that Hackman had and that Costner would plumb it’s not that bad at all.